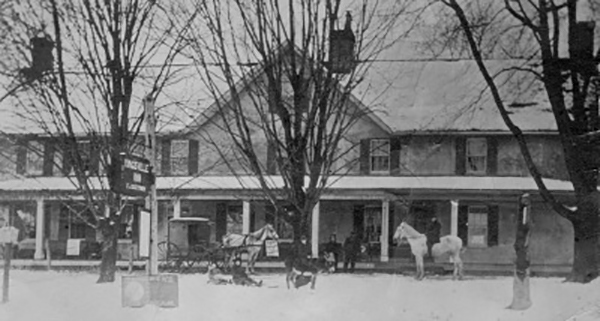 Kingsville takes its name from Abraham King (1760–1836), who died there on December 15 at the age of 76. King, a native of Willistown Township, Chester County, Pennsylvania, acquired some 290 acres (1.2 km2) of land from Thomas Kell (a county judge) in and about the site of Kingsville from parts of the original grants of Leaf’s Chance, William the Conqueror, Selby’s Hope, John’s Delight and Onion’s Prospect Hill, according to a deed executed May 13, 1816. King lived in the old Hugh Deane-John Paul mansion (later known as the Kingsville Inn and presently as the Lassahn Funeral home on Belair Road) with his wife Elizabeth Taylor, a sister of the Hon. John Taylor of Willistown, who settled in the West and was the Chief Judge of the Superior Court of Mississippi for a number of years. An 1823 assessment of Old District 2 showed “Abraham King with 290 acres of ‘William the Conqueror’ and $350 worth of improvements, no slaves.”

The King family operated a tavern according to an 1847 advertisement in American Farmer (a pioneer agricultural journal) at the forks of Bel Air and Joppa (presumably present day Jerusalem) roads. U.S. postal records indicate that a post office was established at King’s Tavern on January 29, 1829, with a George King noted as the postmaster; the office was named “Kingsville” on January 8, 1830. In 1840, State Geologist John Henry Alexander was the first to put Kingsville on a map.

Kingsville is bordered by the restored Jerusalem Mill Village museum, Jericho Farm, and the renovated Jericho Covered Bridge on the banks of the Little Gunpowder Falls. They are listed on the National Register of Historic Places.